I am back from my quick trip out to Ohio to see the Norman Rockwell exhibit at The Dayton Art Institute so I thought I would give a little re-cap of my trip.

First of all, since I was going around Indianapolis I decided to check out the art museum there.  I was really glad I did!  It is a terrific art museum.  It cost $5.00 to park but the museum was free. 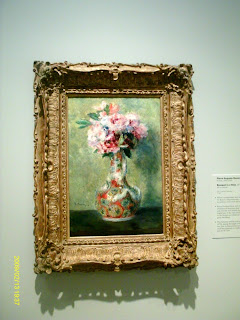 The museum has a large number of paintings from many well known artists like Monet, Van Gogh,  Cassatt and Renoir.  This painting by Renoir was my favorite.  It really spoke to me.


So then it was off to Dayton ( with a couple of stops at some antique shops on the way).

The next day I went to the Rockwell exhibit.  I'm not sure what I expected to see, but I think I was surprised by what I saw and I think I learned a few things.  First of all, of the 32 full size paintings in the exhibit, I was surprised by how large they are.  Most of them are at least 30" on one side. Some quite a bit larger than that.

I guess I was interested in seeing his brush strokes up close.  Well, there aren't a lot of brushstrokes!  Most of his work is rather flat surfaced.  The painting at the top of this post was an exception in that the blobs of paint on the palette actually  stand out a good 3/4 of an inch.  The paintings were very well done and had a lot of detail but they were for the most part smooth surfaced.  Almost all of Rockwell's paintings have very simple backgrounds.  Much of this is due I'm sure,  to the fact that they were used as magazine covers, but it was nice to have the subjects stand out without fussy backgrounds.  But the simplicity of the brushwork and backgrounds didn't really matter because you are instantly drawn in to the painting by the people represented in them.  You want to know what they are thinking and doing.  There is a story being told.  There is also an instant emotional response to his work.  One woman viewing the exhibit was crying.  They are that fantastic!

The biggest thing I think I learned was that Rockwell probably spent 95% of the time on each painting planning, dressing, arranging, photographing, drawing and color testing before he even picked up a paint brush.  In the example above, he tested over a dozen different expressions for the woman in the painting before deciding on this one.  (Good choice!)

Another thing that goes along with this is that he worked very very hard.  His second wife joked that in order to spend time with him she had to take him out of the country far away from his studio.  But he was also prolific.  In his life-time he painted over 4000 pieces of original art.  Imagine that....4000!   So if he painted for 64 of those 84 years that is around 62 paintings a year.  And those were BIG paintings!

Thanks for stopping by. Feel free to leave a comment! 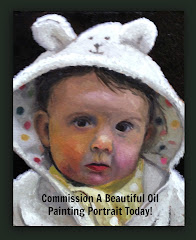 "Something about your artwork makes me smile and breathe ALL the way in (which is all I need most of the time!) I want them all around my house." - Tamsin Martin 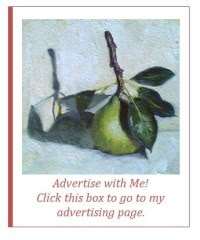 The purpose is for individual human beings to create paintings that arrest the attention, that stir the soul, that point to the mystery-the paradox-the glory-the hidden-ness of existence--that kindle the imagination. Paintings that don't preach but point to something previously unseen, unheard, untouched, unheralded in our brief journey on the planet. Paintings that shut our mouths and open our hearts and minds in ways previously unimagined. Paintings that shift the collective perception, that make us weep, or at least take off our hats in the presence of something great even if we can't talk about greatness. Paintings that endure over time because they are-- well...timeless. - Don Hatfield

Subsribe to My Blog by RSS

Welcome to my blog Karla Uphoff Fine Art. This blog is designed to share a little about my journey with my art and my life. I'm glad that you have stopped by. I am a country girl living the country dream. So much of my art is inspired by my rural roots. Please feel free to explore my blog and follow me on my journey to learn new things. You can read more about me here. If you are interested in purchasing any of my artwork please contact me at kuphoff59@gmail.com
You can also view my website Karla Uphoff Fine Art

All art needs a place to call home - Some of the places where my art lives. -


View Who Has Bought My Art? in a larger map
Free Sweepstakes

Thanks for stopping by!